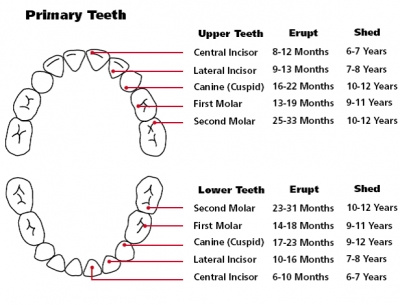 The eruption of your infant’s first tooth is a pretty big deal. However, it can be an uncomfortable process for you and your baby unless you’re prepared. The following chart gives an estimated timeline for primary tooth eruption and serves as a guide in getting through this developmental stage easier.

Most infants begin teething around 4-7 months, but this time frame may vary. Symptoms and intensity of pain may also differ from child to child. Common symptoms include but aren’t limited to: slight fever (less than 101 degrees Fahrenheit), swollen and tender gums, drooling, crying and being irritable, sleeping and eating pattern changes, runny nose, and gnawing on objects.

While teething can be very uncomfortable for the infant, it generally doesn’t make them ill. The following symptoms don’t usually occur during teething: severe rash, high fever, congestion, cough, uncontrolled vomiting, and uncontrolled diarrhea. If these symptoms arise and persist, contact your pediatrician immediately.

When trying to soothe your baby and ease teething pain, the key is to be versatile. What works for one baby may not for another. Traditionally, anything cold (not frozen) is essential in decreasing inflammation and assists in producing a numbing effect. Many devices on the market are approved by the American Academy of Pediatrics (AAP). Choose teething aids that are approved by the AAP and make sure to clean them after use. Look for large pieces without small parts that can pose as a choking hazard. Your pediatrician may also prescribe acetaminophen or ibuprofen if the pain is intense.

There are two products that the AAP doesn't recommend. The first one is a very trendy teething device. The apparatus is made with amber beads that are strung into a teething necklace. Baltic amber (fossilized tree resin) is used and is supposed to release oil into the bloodstream to decrease the pain. These claims aren’t proven, and the beads are a choking and strangulation hazard.

The second product which isn’t recommended by the AAC is numbing gels containing benzocaine. These over-the-counter gels were used frequently and rubbed on the gums to provide comfort. However, the Food and Drug Administration has concluded that benzocaine shouldn’t be given to children under the age of two.  Also, topical medicaments wash away quickly because of saliva flow and are swallowed which can be dangerous.

Teething can be a difficult time in your child’s life. However, being prepared and choosing proper teething aids will facilitate the developmental process. Before you know it, your baby will have a mouthful of pearly whites!

Tweet
Published in Blog
More in this category: « Hiring an Associate - The Role of the Senior Doctor Malpractice - A Term That Strikes Fear in Practitioners »
back to top